The grape have a dark colour and robust tannins and is a purple grape variety used in the making of red wine. It is a thin skinned grape that normally needs more heat and sun than the Cabernet Sauvignon or Merlot grapes to mature. Malbec is very susceptible to various grape diseases like, downey mildew, frost and rot. Malbec seems to do ok in a variety of soil types, but produce the darkest grape with a high tannin content in limestone based soils (specifically those of Cahors in France)

Due to the vines susceptibility to rot, it did not respond very well in France. A group of Argentine winemakers took vine cuttings from France and brought them back to Argentine with them. They planted the majority in the Mendoza region where they thrived in the hot high altitude climate, showing none of the weaknesses they had in France.

Malbec is used primarily in Bordeaux style blends and also blended with Merlot to make full-bodied, dark wines. Recently Malbec is made into 100% Malbec varietal wines. Malbec is softer in tannins and lower in acidity while young, and produce a distinct Blackberry flavour in the mouth. You will also find aromas of tobacco and raisins in some regions.

Malbec wine made in Argentine was consumed inside Argentine and very little was exported. When the prices of wine started to rise in the United States, regular wine drinkers were looking for an affordable alternative and thus Malbec arrived on the scene. The wine became popular by word of mouth and not by wine lists because it was not the sommeliers who have discovered it. It is still found more in people’s homes than in restaurants.

Lamb shanks are also great with a rustic Malbec as well as beef stew or sausage with garlic.

Your full-bodied Malbec’s goes with lamb, beef or pork done over a smokey fire, venison and steak pies.

Malbec should be served just a little below room temperature (14 – 17 degrees C), and because it is a bold wine, you do not need a large bowl glass. The shape of the glass is important because you want to get the full experience of the wines flavors and aromas. Look for a nice egg-shaped glass, even a smaller size Burgundy glass will work. 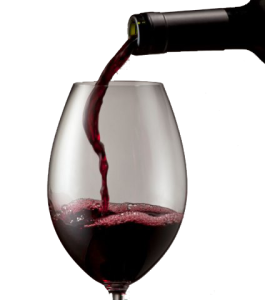